Robert Simon was born in 1949 in East St. Louis, Illinois. He spent most of his early life in Southern Illinois and West Tennessee. Simon attended the University of Tennessee in Knoxville, obtaining a Liberal Arts degree in 1971 with a major in History. He began teaching in 1972 and spent 40 years teaching US History, Government, and Sociology, in Oak Ridge, Tennessee, where he still resides in retirement. Simon began drawing at about age 12, penciling and shading small boxes, triangles, and circles in the margins of his school books and notebook paper. Never having taken an art class, his drawings, over the years, have become significantly more complex, the shading now in brilliant, vivid colors, and the shapes and figures more diverse and multifaceted. With each drawing, a new expression of his changing inner consciousness emerges. 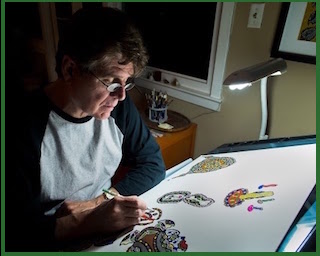 Drawing is and has been an incredible escape for me throughout most of my life, but, until I was in my early 50’s, I hid my work from most people.  I viewed it like a nervous habit I could not break.  I was embarrassed if someone other than my students or children saw what I was doing and called me an artist. I certainly did not consider myself an artist nor what I was drawing, art. People often ask me how I can do this. I wonder why I do this. The objective is not to create some kind of appealing, thought-provoking work but, rather, to allow my mind’s eye to have free rein to travel wherever it wishes.  Drawing is meditation to me.  It helps put balance and order into my life. I feel a calmness settle in, and my mind is focused, but not on any specific notion or idea. The thoughts come and go and are free-flowing. I have never drawn the same thing twice. I can’t. I have tried with some things – the result is never the same. One’s mind is never in the exact same place twice and my drawing is like that, ever-changing from one moment to the next.

People frequently ask me what certain drawings mean. I believe that art evokes thoughts and feelings that are the viewer’s own. To dictate what should be interpreted interferes with what the viewer may need most out of the experience. Each person is free to input whatever meaning they wish on my work. However, you could say that a common theme played out in my work is the constant battle between chaos and order. What might at first seem chaotic and confusing, after looking more closely, you can see continually repeating patterns that form a larger entity. You might say it is a visual jazz of limitless patterns and infinite combinations with no set conventions to follow.

Simon was described as an amazing outsider talent by Jerry Dale McFadden, the director of the former Tag Gallery, who exhibited Simon’s work for a number of years (see Exhibitions below). “His outlet is creating beautiful, abstract pieces filled with brilliant colors and themes that constantly change no matter how long one looks at them,” McFadden writes of Simon. “His drawings are mirrors of his soul, expressing streams of thoughts that he cannot articulate to others or even to himself. Refreshingly original and raw, each piece is unique with his imprint on it.”

The Encyclopedia of Living Artists describes his work as “manifesting from a purity that invites the ceaseless flow of form and symbol from his inner self. He is a vehicle for the collective unconscious, mirroring the heartbeat of the mind and introducing the viewer to their own set of memories.”

Jayne Weber, a trained artist from NY who purchased a piece from his first exhibition, stated, “I look at these [drawings] and want to throw all my formal training away! It’s honest. He’s not afraid. It’s someone going at it for their soul. I’m going to buy it now while I can afford it.” Marjorie Kaye, Director of the former Caladan Gallery and Gallery 181, says that “Simon’s images are loaded with love and humor, observation and declaration. He is an artist shooting from the hip, with no restraints on the material manifestation of his imagination! His work exudes a freedom and natural exuberance rarely seen – probably because he does not impose any conventions on himself. One could find one’s reflection in his work for hours, days, and even an eternity! We also must mention his use of color, texture, and form as being highly bindless in nature. This in turn, is a gift to us.”

Simon’s work has been exhibited in numerous galleries and online art sites, as follows:

Simon spoke at the Skyland Trails Residential Treatment Center in Atlanta, Georgia, where he communicated to his audience what moves him, how he is helped by his art, and how his audience, particularly those most troubled, can find some medium in which to express their most inner thoughts and feelings. He has spoken to groups at the Community College of Vermont in Burlington, The Children’s Art Museum in Oak Ridge, Tennessee, and the Waldorf School in Nashville, Tennessee.  His talks were well received due to his ability to relate to and connect with his audiences that comprise both children and adults.